In todays post I will share 6 of my top favourite Christian fiction books of all time. Though as a Christian I love these books, all of these books are fictional stories and have been enjoyed by millions of people all over the world regardless of their religion. I have titled this post 6 great Christian fiction however it could easily be titled just 6 Great Fiction Books of all Time!

There is really nothing better then curling up with a good book, in my opinion. For many seasons of my life I have turned to a beautiful fiction novel as my book of choice, however for the last couple years I got into the habit of only reading non-fiction books.

Though I really wanted to get back into reading fiction, I found it difficult after reading so many non-fiction stories. The problem I was having was that I started to lose my ability to focus my attention on a fiction book when what I was craving were facts from non-fiction.

The thing is though, we were made for stories. God has been telling a story from the beginning of time, and your in it! Our souls long for story and though a fictional story can often feel “pointless” mainly because of our post-modern generations emphasis on facts, fictional stories have the power to renew and transform our minds, usually more then a non-fiction book.

Not all Christian fiction is created equal

Now, it’s important to be reading Christian fiction, because it feeds our souls in a different way then just reading non-fiction books. But it’s also important to keep in mind that just because a book is written by a Christian or sold in a Christian bookstore doesn’t mean it’s the type of novel I am talking about in this post.

In order for a fictional book to be exceptionally good food for our souls it needs to have an over-arching story of the gospel in it. This was a new concept to me, but as I am in the homeschooling world because well I homeschool our daughters over time I have learned a lot about the importance of stories and what kind of stories we need.

A great podcast that I LOVE regarding finding the gospel in stories is The Literary Life Podcast. This podcast is hosted by Thomas Banks, Angelina Stanford and Cindy Rollins and it has taught me so so much about what are good stories and how to find them. I highly recommend checking it out if this topic interests you.

So now that I have somewhat set up the premise for why it’s important to read Christian fiction, and the fact that not all “Christian Fiction” is created equal let’s get into my top 6 Christian fiction picks!

Most of these books are classics, and hugely popular books regardless of if you are specifically looking for a Christian book or not. The reason for that is although these books are excellent, well written stories that will sweep you along and have you wanting more, they are not necessarily going to spell out the gospel message or talk about Christianity in a clean defined way that you may be used to.

These are stories, Christian stories with gospel themes but they read (except one) as just fictional stories. And that’s why I love them.

Peace like a River is the one book out of the 6 I have chosen for this book list that does have characters that are clearly defined as Christians and talks about specific Christian morals and principles. It is one of the best books I have ever read, and is so well written! It’s no wonder its a national best seller having sold millions of copies and I think everyone should read it. I also included it in my 5 Best Christian Books Ever Post I loved it so much.

Young Reuben Land has little doubt that miracles happen all around us, suspecting that his own father is touched by God. When his older brother flees a controversial murder charge, Reuben, along with his older sister and father, set off on a journey that will take them to the Badlands and through a landscape more extraordinary than they could have anticipated. Enger’s novel is at once a heroic quest and a haunting meditation on the possibility of magic in the everyday world.

Watership Down by Richard Adams

Watership down was actually written by Richard Adams as a story for his children. In truth it is not necessarily a Christian allegory or a story explicitly about Christianity however it has so many gospel themes in it and that is why I have included it in this post. It’s a book a picked up a couple years ago, probably almost 5 now come to think of it. I was going through some hard things and my sister recommended this book to me. It was exactly the story I needed and I loved it so much. It’s another classic tale that is beloved by many and a national best seller!

Richard Adams’s Watership Down is a timeless classic and one of the most beloved novels of all time. Set in the Hampshire Downs in Southern England, an idyllic rural landscape, this stirring tale of “suspense, hot pursuit, and derring-do” (Chicago Tribune) follows a band of rabbits in flight from the incursion of man and the destruction of their home. Led by a stouthearted pair of brothers, they travel forth from their native Sandleford warren through harrowing trials to a mysterious promised land and a more perfect society. “A marvelous story of rebellion, exile, and survival” (Sunday Telegraph) this is an unforgettable literary classic for all ages.

The Lord of the Ringshttps://amzn.to/3Jynoyn

My husband read his first fiction book at the ripe old age of 35, thats this year folks! I know, I can’t believe it either but it’s true. And what fiction book did he decide to start with, why The Lord of the Rings of course! I being the book lover of the family (closely follow behind by my 11 year old daughter) had never read it!

I did read the Hobbit in grade 6 and loved it, but my Dad had recommend I wait to read the Lord of the Rings until I was older and I just never did. I have seen the movies of course for both, and actually love them but it was Jade who convinced me to read the books. So far I am on the second book and loving them. I have included them in this list as one book though as that’s how the author wrote them and they were split up for ease of reading but the story continues through all 3 and all three must be read.

The Lord of the Rings Boxed Set

J.R.R. Tolkien’s classic fantasy has accumulated worldwide acclaim as the greatest adventure tale ever written. No other writer has created a world as distinct as Middle-earth, complete with its own geography, history, languages, and legends. And no one has created characters as endearing as Tolkien’s large-hearted, hairy-footed hobbits.

Out of the Silent Planet

The next three books are also technically a trilogy however they are separate stories within a story so I have split them up as three books. This series is one of the beloved series from the amazing author C.S. Lewis and it is so so good! I read these a couple years ago and definitely want to re-read them soon. They follow a bunch of different characters and are primarily considered a sci-fi, adventure series. Even if sci-fi is not your thing I would still encourage you to pick these up and give them a try, as they are very moving and lovely books enjoyed by all kinds of readers.

Out of the Silent Planet

The first book in C. S. Lewis’s acclaimed Space Trilogy, which continues with Perelandra and That Hideous Strength, Out of the Silent Planet begins the adventures of the remarkable Dr. Ransom. Here, that estimable man is abducted by a megalomaniacal physicist and his accomplice and taken via spaceship to the red planet of Malacandra. The two men are in need of a human sacrifice, and Dr. Ransom would seem to fit the bill. Once on the planet, however, Ransom eludes his captors, risking his life and his chances of returning to Earth, becoming a stranger in a land that is enchanting in its difference from Earth and instructive in its similarity. First published in 1943, Out of the Silent Planet remains a mysterious and suspenseful tour de force.

The second book in C. S. Lewis’s acclaimed Space Trilogy, which also includes Out of the Silent Planet and That Hideous Strength, Perelandra continues the adventures of the extraordinary Dr. Ransom. Pitted against the most destructive of human weaknesses, temptation, the great man must battle evil on a new planet — Perelandra — when it is invaded by a dark force. Will Perelandra succumb to this malevolent being, who strives to create a new world order and who must destroy an old and beautiful civilization to do so? Or will it throw off the yoke of corruption and achieve a spiritual perfection as yet unknown to man? The outcome of Dr. Ransom’s mighty struggle alone will determine the fate of this peace-loving planet.

The final book in C. S. Lewis’s acclaimed Space Trilogy, which includes Out of the Silent Planet and Perelandra, That Hideous Strength concludes the adventures of the matchless Dr. Ransom. The dark forces that were repulsed in Out of the Silent Planet and Perelandra are massed for an assault on the planet Earth itself. Word is on the wind that the mighty wizard Merlin has come back to the land of the living after many centuries, holding the key to ultimate power for that force which can find him and bend him to its will. A sinister technocratic organization is gaining power throughout Europe with a plan to “recondition” society, and it is up to Ransom and his friends to squelch this threat by applying age-old wisdom to a new universe dominated by science. The two groups struggle to a climactic resolution that brings the Space Trilogy to a magnificent, crashing close.

Thanks for stopping by the blog today. You can also find me on Youtube, Instagram and Pinterest. Did you know we make and sell home decor!? You can shop our home decor products on our Etsy shop. 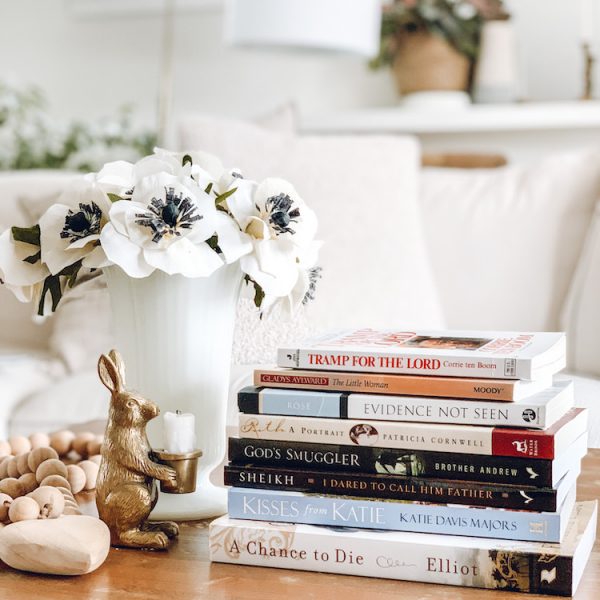 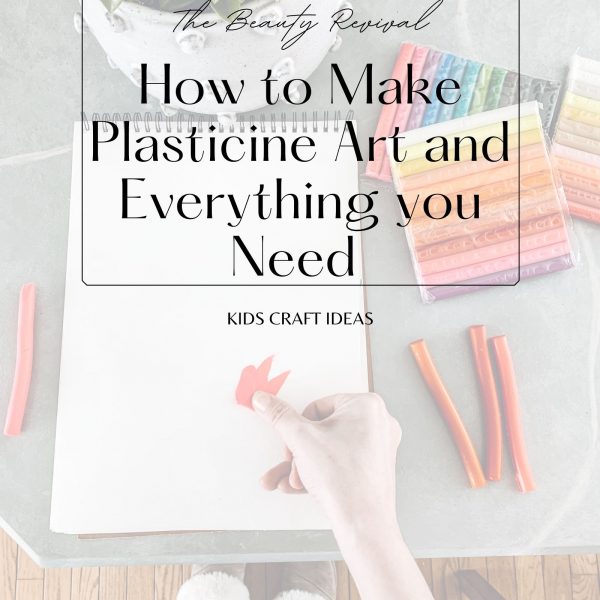 How to Make Plasticine Art… 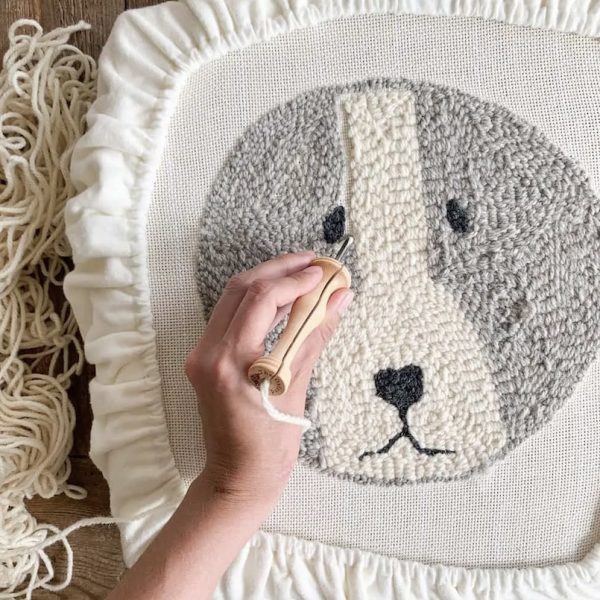 7 Crafts for Teens and… 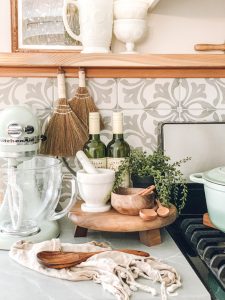 TheBeautyRevival.com, Inspired by home and the people in it. 🌿🍊Shop our handmade products @revivalgoods.shop

A little #sundayshelfie for this beautiful May lon

Thanks to Rufus all my dreams for swapping out my

My favourite cozy little corner where I get to do